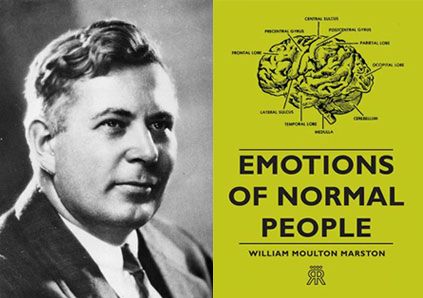 A Brief Biography The biography of William Marston is a very interesting and impressive one. Some would describe him as the Father of DISC Theory, but the story of Dr. Marston doesn't end there. He's known as an academic, a philosopher, a lawyer, a psychologist, a writer, and an advocate for women's rights. William Marston also invented the Polygraph Machine (or Lie Detector) and created the character of Wonder Woman for DC Comics.

Dr. William Marston discovered a correspondence between telling a lie and a rise in blood pressure during his early studies. He went on to build a device which would measure changes in a person's blood pressure as they were being asked certain questions. He published his findings in 1917, after he had constructed the first polygraph machine in 1915. During the 1920's and 30's, William Marston was an active lecturer and consulted with government groups. He found the topic of the general population and every day person, far more interesting than that of abnormal forms of psychology. The federal government paid attention to his research, and he offered his services with the polygraph machine and general lie detection during the 1930's kidnapping of the Lindbergh baby.

In 1924, although his work was still very significant in the court & legal system, he began to study the concepts of a person's will, sense of power, and the effect this has on personality and human behavior. His work has been widely recognized in the field of psychology, and ultimately led to the commonly used DISC profile today. His book, "Emotions of Normal People" was published in 1928 and presented his findings. He published a second book in 1931 titled, "DISC, Integrative Psychology." Although Marston did not develop the actual DISC Test, DISC Assessment, or DISC Profile, his findings in these two books about the measure of human behavior and consciousness that led to the theory behind the later development of the actual test.

Marston was involved with the earliest movements for women's rights, including issues of voting, birth control and career equality. With this in mind, it's no surprise that Dr. William Marston created Wonder Woman for DC Comics. He felt that women needed a symbol of power in such a changing time in women's rights. He said, "Not even girls want to be girls so long as our feminine archetypes lack force, strength and power. Not wanting to be girls, they don't want to be tender, submissive, peace-loving as good women are. Women's strong qualities have become despised because of their weakness. The obvious remedy is to create a feminine character with all the strength of Superman plus all the allure of a good and beautiful woman." Wonder Woman made her first appearance in December 1941.

As Marston was well educated in both Greek and Roman mythology, Wonder Woman possesses some of these archetypes. She uses a lasso for truth, and she is full of will and power. William Marston also incorporated in her personality the four dimensions of DISC Personality Style: Dominance, Influence, Steadiness, and Compliance. Max Gaines from DC comics and William Marston were unsure of how a female heroine would be received. At first, he wrote the comics under the pen name of Charles Moulton. Wonder Woman ended up being a huge success, and he continued to work on it until his death in 1947. He was ultimately inducted into the Will Eisner Award Hall of Fame in 2006 for his work on Wonder Woman.